Tachingoza Bay in the Lazovskii Reserve is only the slightest of indents along the coast; a place where the Sea of Japan tested the land’s resolve and met with firm resistance. Here, gulls cluster raucously on the sandy rises—malleable dunes that shift and reform as the sea sees fit—while shorebirds chase the receding surf to peck at invertebrates disoriented by the waves. Groups of sika deer emerge from the forest to cross a rust-colored carpet of grasses en route to the beach; their sharp hooves leaving deep imprints in the sand as they search for sodium-rich seaweed cast there by the tide. This place is, in many ways, idyllic.

It is also a killing floor.

Between nibbles, the sika deer crane their necks above the obscuring berms of sand to study the tree line with twitching ears and nervous whistles, ready to bolt at a moment’s notice. Each shrub, log, and boulder peeking from the grasses is afforded extra scrutiny. The source of their tension is a patient predator; one who could appear without warning. The deer watch for tigers.

The hunting conditions at Tachingoza Bay are ideal for Amur tigers; these big cats take advantage of summer fog, sea static, and ribs of sand coated by auburn grasses to become near-invisible as they steal within striking distance of their prey. For the deer, it’s death incarnate materializing out of thin air.

The phenomenon of tigers hunting deer under fog at Tachingoza Bay was first recorded by scientists in the 1960s. In one observed case, a tiger was able to saunter up to a group of seven deer, kill one of them, then drag its carcass back into the privacy of the wind-bowed oaks while the remaining deer scattered through the fog in blind panic.

Generations of deer have been drawn to the coast here for the sodium otherwise deficient in the landscape, and generations have feared the striped ghosts that haunt this place. It’s easy to forgive them their angst. 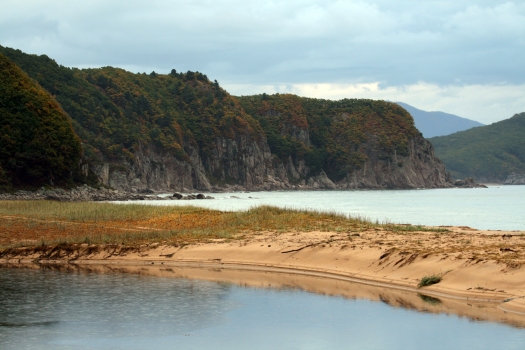 2 Replies to “The Killing Floor”