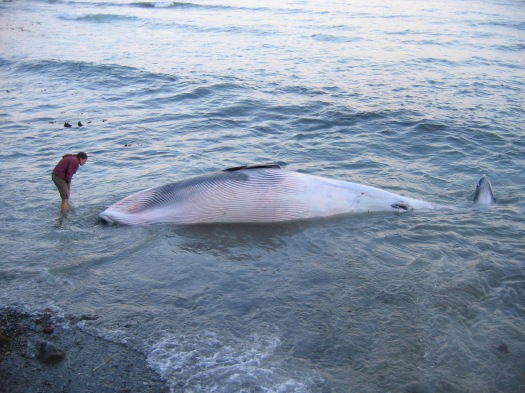 Minke whales are an uncommon sight in the Sea of Japan off the coast of Primorye each autumn, and when the carcass of this one washed up on the shore of Malaya Bay near the village of Ternei in spring 2006 its appearance did not pass unnoticed for long.

I heard about the whale rather early–apparently the same day the tides pushed it toward land–and some friends and I hiked over the steep hill separating Ternei from Malaya Bay that evening to see this smallest of the baleened giants for ourselves. We watched the carcass roll in the tranquil surf and marveled at the creature’s size until darkness made further observation impossible.

Word of the whale spread quickly throughout Ternei. The sparse stream of curious villagers willing to trudge along the trail of rock and mud to gawk at the remains eventually grew to a throng of the practical, and within a week the carcass had been cleaved of most of its meat: the hunting dogs of Ternei had plenty to eat that spring.

From my vantage point over the cold, clear waters of the Sea of Japan at Lazovskii Reserve in Primorye, I spotted migrating minke whales and a roiling cluster of harbor seals. The sandy beach below bore tracks of sika deer, Eurasian otter, and Amur tiger. A tigress had sauntered among the boulders there only a day or so before me, pausing to scent-mark the rock with her pungent, earthy urine. She continued down the beach to ascend the low saddle where I now stood, and I lost her trail as she moved into the vegetation. She likely climbed up the ridge–possibly in search of sika deer–or perhaps looking for a quiet place to soak in the sun on one of these last, perfect, late summer days.