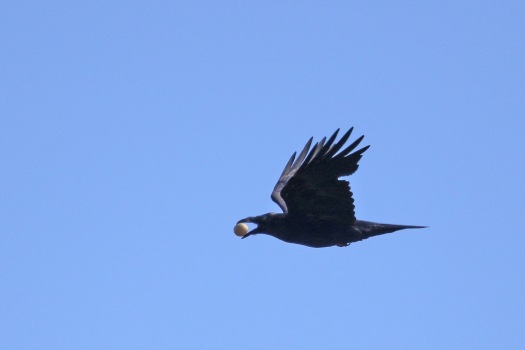 A RAVEN MOVES ACROSS the unblinking Arctic sky, a prize in its bill. This treasure is an egg, possibly from one of the duck nests I’d seen nearby on the coastal Alaskan tundra. Perhaps the raven intended to crack this Arctic pearl right away or, more likely, it planned to cache it in an underground crevasse for later. The permafrost here, like a refrigerator, keeps eggs cool for months until ready to eat.
There are many pirates in the Arctic bird world — jaegers and gulls among them — but ravens, notorious egg thieves, stand unrepentant in their own category. Arctic terns migrate twelve thousand miles only to lose their nest to ravens; pintail ducks avoid foxes, hunters, and innumerable dangers on migration across North America only to have a raven spirit away every egg they lay. Given the scatter of eggshells left in their wake, it’s easy to feel sympathy for the victims of ravens.

But it’s also hard not to admire ravens for their ingenuity. These are intelligent birds; in their quest for protein-rich eggs they track the movements of breeding adult loons to find clutches concealed among the hummocks, and even follow researchers such as myself — conspicuous on the open tundra — to zero in on hidden duck nests. Ravens are thieves of necessity, doing what they must to survive in the Arctic.

One Reply to “The Egg Thief”